I read a post on Feministing.com today that made my blood boil.  The post, entitled “Hating black hair starts young, just ask Blue Ivy Carter”, gave voice to everything I’d been thinking about the people who’ve taken to the internet rah-rah’ing about a baby’s kinky, curly, fuzzy hair, taking shots at both the parents AND THE BABY.  Huh?!  So, enraged, I posted a link to the article on my Facebook page with the following commentary:

THIS. It infuriates me that people hate to see hair in its natural state — unstyled, unaltered. Black people especially hate to be reminded of how most of our hair REALLY looks, so we pull, prod and burn our own hair into submission and/or wear the hair of someone else. (Sounds kinda crazy when I put it that way, huh?) And I am so disgusted by people who think it’s okay to take shots at a BABY and/or her parents for not “doing” her hair. She’s a BABY, and this is what her hair looks like. It’s like y’all expected the child to be birthed out of Beyoncé with a full virgin Malaysian weave that matches her mama’s. Ridiculous. The politics of black hair. *smh*

Naturally, because I’m friends with a great group of opinionated black women both on Facebook and in real life, this post created quite a stir.  The back and forth comments evolved into a discussion about whether natural hair should be “kept”.  And what I had to say in response to that is that I don’t believe that hair — any kind of hair — needs to be “kept” anything but clean.  Had you asked me this years ago, before I went natural myself, I probably would’ve had a different opinion.  But, today, after fielding many off-the-wall, inappropriate, GTFOH comments about my hair, I truly stand behind my belief that hair is a personal choice and people should be able to wear their hair the way they want to wear it without being ridiculed for it.

But what really burns me up is that people act like Blue Ivy was going to miraculously be born with some silky straight hair flowing down her back like Beyonce.  Well, newsflash, folks… that ain’t Beyonce’s hair!  I mean, it’s hers in the sense that it’s in her possession AND she paid for it (and probably paid a pretty penny at that!), but it did not sprout from her head in that texture, in that particular shade of honey blonde, and did not grow from her scalp to that length.

(Blue Ivy is so adorable that I don’t even notice her hair here.)

And, then, let’s look at another photo of Bey and BIC that I adore: 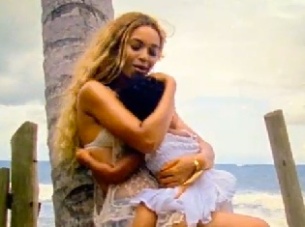 So, while we sit here and debate the merits of keeping a child’s hair “done”, nobody is going to mention that mommy is wearing two pounds and twenty feet of someone else’s hair?  Why is that not an issue?  While folks are busy criticizing Bey for sending Blue out with her hair “undone”, why aren’t they also taking shots at Bey for her own hair shenanigans?  I’ll tell you why: because in our society “kept” hair means “tamed” hair.  But Black hair grows up and out, it’s wild and free, it’s difficulty to contain, and that’s deemed “messy” or “unpresentable”.

I have more questions.  Just who decides what “presentable”, “kept”, or “done” means anyway?  And what subliminal messages are we sending to ourselves and to our children when we say that the way that Black hair grows naturally out of Black heads is “unpresentable”?  I know PLENTY of white women who roll out of bed without putting comb or brush to hair, and they are considered to be not only “presentable”, but beautiful in their most natural and “undone” states (so beautiful, in fact, that “tousled curls” and “bed head” are actually desired “looks” in the white world of hairstyling).  Why can’t we be granted the same pass?  Why does unshaped, unstyled, unaltered, natural black hair evoke cries of “unkempt”, “unkept”, and “uncouth”?  It makes me so sad to see that we hate our hair in its natural state to the degree that we’re driven to think it’s acceptable and appropriate to talk trash about a innocent precious baby.  It makes me uncomfortable that we are so disgusted by our own God-given characteristics that we would vilify loving parents who choose to let their baby’s hair go free rather than conform to society’s standard of “tame” or “kept”.  It hurts me that all signs everywhere always point to the fact that who we are is not good enough to be accepted by the mainstream.

On a lighter note, the most hilarious insinuation is that Blue’s “undone” hair is a sign that Jay and Bey are in some way neglecting her.  Blue Ivy’s hair looks “that way” because that’s how they want it to look.  Don’t believe for one second that her look is an afterthought.   Believe me when I say that The Carters could hire someone to comb and moisturize each individual strand of hair on Blue’s head if that were a priority to them.  But clearly Blue’s fabulous ‘fro is not something that concerns them, and the way she looks when they take her out to meet the paps is presentable TO THEM, so it should concern us.  And, really, until Blue is old enough to voice her own opinions about how she looks, her parents’ opinions are the only ones that really matter.

Look, I’m thrilled that more black women are embracing their natural hair — that’s a beautiful thing to see.  But, what I’d love more than anything would be for us to get to a point where natural hair is not a “thing” to be discussed or embraced.  I eagerly await the day that “natural hair” — Black hair — will just be hair… because that is all it is.

“Remove the kinks from your mind and not your hair.” – Marcus Garvey